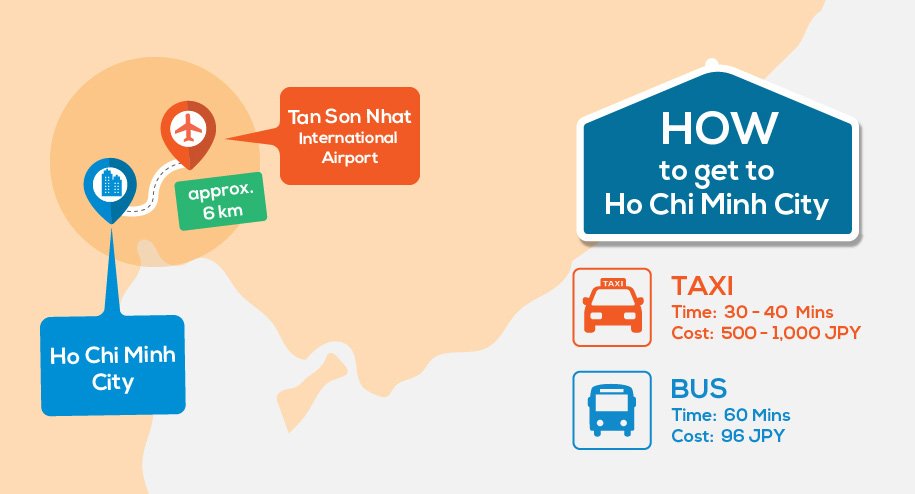 Ton Son Nhat International Airport is a largest international airport in Vietnam located 4km North of Ho Chi Minh city.
Taxi is considered the best way to get from an airport to Ho Chi Minh or the city centre. One recommended taxi service is Vinasun. There are 2 types of taxi in Vietnam: Pre-paid Taxi and Metered Taxi. Pre-paid taxi costs higher than the metered taxi, however you don’t need to worry about risked and scrammed taxi using meter. Taxi in Vietnam usually costs around 500 – 1,000 JPY and takes 30 – 40 minutes to the city centre.
Bus is a cheaper way to access Vietnam’s city centre, if you arrive in the daytime. Local bus runs from 6am to 6pm every 30 minutes. You can look for line no. 109 or 152 which costs around 20,000 Dong (96 JPY).
Life in Vietnam - There is a variety of restaurant and food shop in Vietnam. You can have a good and high quality local food by paying around 150 yen.
source：http://vietnam.navi.com/special/5002611
source：https://www.asiatravelnote.com/2017/03/24/ho_chi_minh_airport_transportation.php
source：http://vietnampropertyguide.com/number-of-japanese-living-in-vietnam/
source：http://vietnam.navi.com/special/5038293